Tina’s soundtrack is formed of hits from Tina Turner’s extensive back catalogue of music dating from 1957 to 1988.  Many people would term this a jukebox musical. However, writer Katori Hall prefers to use the term bio-musical: the show uses Tina’s music to tell Tina’s true story. This is different from many jukebox musicals which combine songs to tell a fictional story.

The play can also be described as a memory play.  The play begins with Tina preparing to go on stage in Brazil, and before she does she revisits formative moments from her past which have taken her from her childhood in Nutbush, Tennessee, to performing for 180,000 fans in Brazil.  The show then opens up those memories to the audience in a series of flashbacks.

As a musical, Tina is non-naturalistic. The acting style includes the delivery of naturalistic dialogue but many of the characters’ emotions and objectives emerge through what they sing, as well as what they say.   The set design uses various different techniques to suggest location, including video, lighting and minimal set.  Location, mood and atmosphere are created as much through lighting and sound design as much as what is physically on stage. This is vital as there are so many locations throughout the show, and the transitions between each scene are very quick.

Tina herself is rarely off-stage and therefore has several on-stage costume changes.  There are various points in the performance where characters enter through the auditorium, therefore breaking the fourth wall.

The creative team also created several different modes or locations for the performance to identify how the story might be told.

A term coined by the term to create a sense of memory and spirituality, where ancestors and family members enter Tina’s consciousness. There is a sense of magical realism in these scenes.

America and the Deep South

In between the mystical nature of Etherland, and the atmosphere and excitement of the concert sequences, Tina also presents difficult and challenging subject matter of racial abuse and discrimination, and domestic abuse and violence. These are the scenes in which the truth of the harsh realities endured by Tina are exposed. The audience is challenged to consider all of the different reasons for the behaviour that is depicted, but is not necessarily invited to make judgments about the characters who are portrayed. 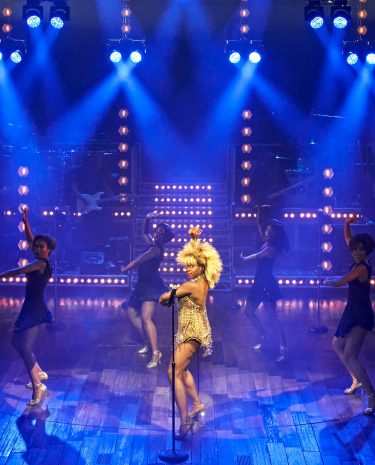 Towards the end of the show the audience are given the experience of a Tina Turner concert, including the use of concert-style sound and lighting, and live musicians who are visible on stage.

What do you notice about the storylines of the jukebox? Who is their target audience? Is this the same or different to the content of bio-musicals?

Discussion: What are the advantages and disadvantages of using an artist’s own music to tell their story?  Is it always the best choice to make? What might be the challenges to this approach?