The story begins in Nutbush, Tennessee, with Anna Mae living with her father Richard, mother Zelma and sister Alline.  However, Anna Mae is partly raised by her grandmother, but finds herself alone due to members of her family leaving or passing away.

As Tina’s story progresses, it’s clear that family is more than just blood ties: it’s the people we can rely on, call on for help, and enjoy spending time with.  After Tina and Alline scatter the ashes of their mother, Tina is joined on stage by her ancestors and those who have supported her through difficult times, including Rhonda and Roger.

Tina also has to make difficult choices – trying to raise her children whilst also trying to earn enough money to survive.  During her trip to London, Tina must rely on Alline to look after Craig and Ronnie, who do not always understand the sacrifices that Tina makes.

Many of the songs in the show feature love as their main theme. Tina is desperate to love and be loved, but in her relationship with Ike the love is one sided and eventually causes her physical and emotional harm. It is the greatest act of love for herself and her children that Tina finally leaves.

The complexities of love in families are also explored in Tina: loyalty, ambition, human fragility and insecurity are all threats to being or feeling loved. It is the love of Tina’s friends that helps her maintain her determination to survive and thrive.

Katori Hall’s script describes the moment between Tina and Erwin Bach backstage in Brazil as the point where ‘Tina finally hands Erwin the keys to her mended heart’. It is interesting that Tina re-introduces herself to Erwin as Anna Mae Bullock in her hotel room in London: she rediscovers herself and is then ready to entrust her heart once again. 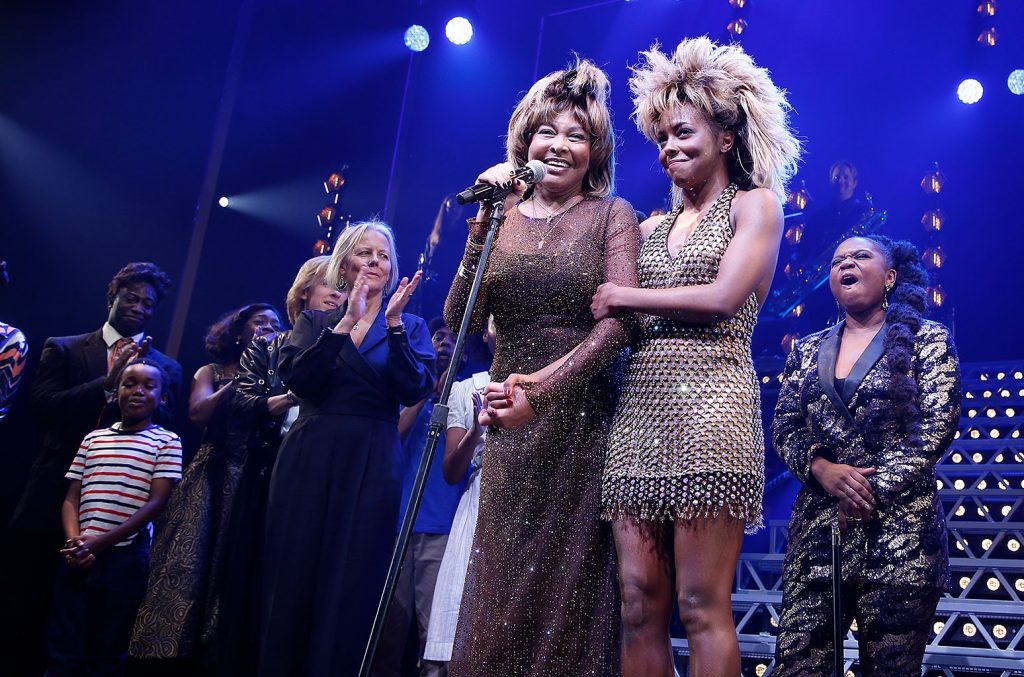 Throughout her turbulent story, Tina inspires loyalty in those around her, including Ikettes who introduce her to Buddhism, offer her emotional support and loyalty (for example, Rhonda, who remained close friends with Tina until Rhonda’s death in 2021).

Abusive relationships are cyclical and can leave damaging legacies in future generations where abuse is likely to be repeated.  Anna Mae witnesses the relationship between Zelma and Richard as unloving and physically abusive, before her mother abandons her in Nutbush whilst taking Alline with her to St. Louis.

Tina’s refusal to leave Ike is not unusual in abuse victims, even as the cycle of physical and emotional abuse continues.  When Ike sings Be Tender With Me Baby, we are shown how emotionally manipulative and coercive his words are as he begs her not to abandon him.   Tina’s divorce agreement is that she can keep her name – she is determined not to lose her own identity even though she may have retained little else.

Tina’s disappointment and sense of betrayal is also clear when she visits her dying mother in hospital: Ike appears in the hospital ward and Zelma insists that Tina forgive him.  She has, to some extent, enabled and normalised Ike’s abuse, and her warnings to Tina about teaching Ike a lesson earlier in the play emphasises the way in which history can repeat itself.

THE POWER OF MUSIC

From the moment we see Anna Mae at the church meeting at the beginning of the show, it is clear that she is moved and inspired by the music.  The power of music to uplift, motivate, soothe, express emotion and to dance to continues to make itself obvious throughout the show, including the concert at the end of the show in which the audience are encouraged to dance and sing.

The show opens with Tina chanting nam myoho renge kyo – a devotion to the Mystic law of the Lotus Sutra.  Raised as a Baptist, several events in Tina’s life caused her to question what she had been taught.  Instead, Tina credits Buddhism, and its chanting, with saving her life and giving her a sense of calm.

Tina’s journey through poverty, abuse, racism, and discrimination threaten to defeat her at points. However, somehow Tina manages to continue, inspired by her children, her ancestors, her spirituality and her ambition.

Anna Mae begins her life in the cotton fields of Nutbush, Tennessee in 1939. This is 15 years before Brown vs. Board of Education passed a law to prohibit racial segregation in school; 16 years before Rosa Parks refused to give up her seat on a bus; 25 years before Lyndon B Johnson signs the Civil Rights act of 1964 which prevented employment discrimination on the grounds of race, sex, religion or natural origin; 29 years before the passing of the Fair Housing Act.

Notice the language that is used in the show to describe Tina in terms of her race and her age.  Ike and the band experience verbal abuse from white townspeople as they travel from one gig to another, and Ike is forced to bribe white police officers to prevent being physically harmed after being turned away from a motel on account of their skin colour.

After Tina records River Deep, Mountain High, Ike tells Tina, ‘ it’s too black for the white stations and too white for the black ones…White boys that sing black music, that’s what’s rocking’.  Tina’s determination to succeed is even more impressive given the emotional and physical toll that racism takes on her and those she works with.

In the Studio Activities